A white passenger sedan rests in a ditch off a quiet country road. The tires are almost hidden by tall grass. In the car is a bald man with a bushy gray mustache. He is not breathing and does not respond when you call to him, so you push on his shoulder. His body slumps limply away from you. You have found a dead body. Will you be afraid and run away or will you stay and help solve the mystery of his death? If you want to be a forensic scientist you will stay and ask the following questions.

“Who is this person? How did he get here, and how long has he been dead? Did he drive himself off the roadway or did something cause him to go off-road?”
A dead body can’t keep secrets for long. It will eventually reveal the mysteries of death to a forensic scientist. There are three different types of forensic scientists that might become involved with a dead body like the one in our mystery.

Medicolegal death investigators are forensic scientists. They are sometimes police officers or detectives who go to a death scene as a representative for the Medical Examiner’s Office. They collect information about the dead person, take pictures, and collect evidence from the scene. They also make sure the body is delivered to the Medical Examiner’s Office safely and securely.

Let’s pretend to be each of these forensic scientists one at a time in order to solve this mystery. First let’s pretend to be a sheriff’s deputy in a small town. You also work part-time as a medicolegal death investigator for the Medical Examiner’s Office.

It is about eight o’clock and the setting sun is bright orange and shining directly into your windshield. While driving your patrol car down a quiet, dusty road you notice the dark silhouette of a car in the distance. Suddenly there is a cloud of dust ahead of you and the car disappears.

As you drive up you look around for signs of the automobile. The car has driven off the paved road and has crashed into a shallow ditch. You notice a lonely coyote running into the sagebrush on the left side of the road. You ask yourself, did the driver lose control of the car because of the blinding sunlight or did the driver swerve to miss that coyote in the road?
You step out of your car and approach the wreckage. The gritty taste of dust fills your mouth and you smell a faint odor of oil and gasoline coming from the wrecked car. Rushing over to the automobile you find only an unresponsive driver slumped over his steering wheel. You immediately radio for assistance and when they arrive, the medical team tests for any signs of life from the driver.

Once the medical team pronounces the driver to be dead you write down the date and time and proceed to collect the following evidence for the medical examiner. First you take photographs of the car and the area immediately around the car. You notice the lack of skid marks on the roadway. (Skid marks can tell you whether or not the driver applied brakes before driving off the road.) You also photograph any damage to the vehicle. Next you wrap the body in a body bag and call the local mortuary to help you deliver the body to the
Medical Examiner’s Office. Finally, you record information about the dead person and the scene of the accident in a report for the medical examiner. (Your report will include personal information such as age and gender and any prescription medications, also death information like stiffness and temperature.)

Now let’s imagine that you are the medical examiner. The mortuary has delivered the body to your office and you prepare to examine it. You put on a blue surgery gown and facemask. Don’t forget your rubber gloves. You choose the black, non-latex gloves. Next you place a white bouffant cap over your hair that makes you look like a “lunch lady,” then safety glasses.
Now you are ready to begin. You pick up a voice recorder and say, “The patient is a 65-year-old white male.  He weighs 195 pounds. His forehead contains a round, 4 centimeter, red-brown abrasion.” You also mention any scars or tattoos if they are visible on the body. These kinds of descriptions can help identify the person later if there are any questions of who he is. 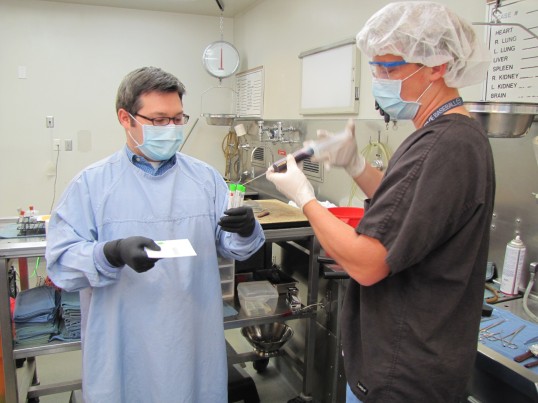 The next step is to collect fluid samples from the body in order to test for drugs and alcohol. You can’t collect all the fluid samples until you open up the body, so you pick up your scalpel and cut the chest in the usual Y-shaped incision. You begin at each shoulder and cut down toward the center of the chest making a V-shape. Then you cut straight down the middle past the bellybutton to finish the Y-shaped incision. (More information regarding autopsy will be discussed in later posts.) Now that the body cavity is open you can get blood, urine, and bile. These fluids are tested in order to get accurate drug and alcohol levels. Finally, you use your scalpel to remove the patient’s heart so you can get a closer look at the heart muscle and coronary arteries. First, you check the main coronary arteries for blockage by blood clots or plaque. These arteries supply blood directly to heart muscle to keep it healthy. If any of these vessels are plugged the heart muscle will die. When your heart muscle dies it is called a myocardial infarct or heart attack.

You examine the heart muscle for signs of a recent heart attack or myocardial infarction. If the man had an immediate infarct the tissue may look darker red from the rest of the heart muscle. Sometimes the muscle will look white if the infarct happened earlier. The white color means the heart muscle died sometime following a previous heart attack that the patient survived. You finish the autopsy by removing and dissecting all of the man’s organs including his brain.

Now it’s time to imagine that you are a forensic toxicologist. You hold up a couple of glass test tubes filled with dark red blood collected from the driver by the medical examiner. You test his blood for traces of drugs and alcohol. Next you test the tube of yellow urine for the same drugs. If the tests are positive for drugs or alcohol then you have to test further to measure how much of the drugs are present. Alcohol levels from both blood and urine can tell you if the driver was drunk at the time of the accident, and if so, how drunk he was.

Test tubes and cups for collecting blood, urine, and other samples for toxicology testing.

Now that that’s done let’s go back to the beginning as the medical examiner. You review and compare the investigative report, toxicology report, and your own notes from the autopsy.  You begin to paint a complete picture of how the death occurred. (This process might take several weeks to months to gather all necessary reports.)

The absence of skid marks at the scene of the accident tells you that the man did not hit the brakes before crashing into the ditch. Loosing control of the car while breaking and swerving to miss the coyote probably did not cause the driver to crash. The abrasion on the driver’s forehead from hitting the windshield was not bad enough to die from (no fractures of the skull) and did not injure his brain, so something else must have caused his death. The toxicology results came back negative for drugs and alcohol, so the driver most likely did not crash because he was intoxicated or under the influence of drugs. (Toxicology testing and reporting can take up to 8 weeks and in some places even longer depending on caseload and budget constraints. This process takes much longer than as seen on television.)

During the autopsy, however, you did find blockage in one of the main coronary arteries. There was also a darker red patch of heart muscle in the area supplied by the blocked artery. This suggests that the driver probably had a heart attack while driving and then crashed his car.

You have the key and now the mystery can be unlocked. This man’s death was caused by a natural event, myocardial infarction or heart attack.

Congratulations, you solved the mystery!

6 responses to “Forensic Science Can Unlock Mysteries of Death”

Photo of the day